While football is one of the most popular sports in the world, Futsal and in particularly Youth Futsal is becoming very popular. While being recognized as a sport on its own, futsal is a soccer variant that is played on an indoor or outdoor court. In fact, soccer coaches and players have turned to futsal as a means to improve on technique, awareness, and decision making. This has so far yielded wonderful results and has contributed in no small part to the increasing popularity of the game. In case you’re not yet convinced about how Futsal training can improve your footballing abilities, below are some benefits of Youth Futsal Training:

One of the reasons soccer coaches love to train players with Futsal is because tactics are easily learned on a mini level on a Futsal court. Once the tactics are perfected, it is easier to take them to a bigger soccer pitch. Hence, Youth Futsal helps implement soccer tactics easily and faster than you can expect on a big football pitch.

The game of Futsal is usually fast-paced with an end to end play that requires every Futsal team to have quick thinking players who are able to make the right decision in a split second. With a seemingly non-stop play, players need to find opponent weaknesses and analyze opportunities while the game is ongoing. Hence, Futsal training is highly beneficial for improving a player’s decision making. It also boosts a player’s spatial intelligence and ability to read the game.

A report from FIFA on the game of Futsal stated that a player is likely to touch the ball 80 times with at least a touch happening every 29 seconds in a 40 minutes game of Futsal. On the other hand, a soccer player averages around 30 touches per 90  minutes. This statistics clearly shows that players are more likely to touch the ball playing Futsal than they can manage while playing soccer. It is, therefore, not a surprise why a Futsal coach can get his players to perfect their technical skills a lot quicker than is expected compared to traditional soccer training methods.

Experienced coaches understand that the more a player puts the ball in the back of the net, the more they’re likely to continue doing so. This is why Futsal has become a safe haven for strikers and midfielders who are looking to improve their finishing ability. With only 4 outfield players on both sides, Futsal is a game that presents many scoring opportunities which results in a lot of goals. If you need a confidence booster in front of goal, Futsal is always a great help.

The very reason Futsal is a great way to improve a player’s attacking play is the same reason it is good for learning to defend. With both sides doing a lot of attacking during the game, each side will have to do a fair bit of defending too. Modern football encourages all players to be involved in defending, but with 4 outfield players, a futsal team has no choice but to defend together, thus, improving each player’s defensive game.

For a budding Footballer, football rules can be quite problematic and making the game a little hard to enjoy. Futsal does not have rules like offside that may be a little too complicated for youngsters and prevent them from playing. This encourages players to play more, express themselves on the court without worrying about such rules that may frequently stop play.

With only 5 players on each side, Futsal encourages players to be more involved in the gameplay. It is hard to find a player in a Futsal club who isn’t playing as much as his teammates. This is because Futsal allows for unlimited substitution which means every player gets to enjoy game time and see a lot of the ball. For players in big academies who find it difficult to touch the ball often in a practice match, Futsal provides the perfect opportunity to get involved more often.

Many players engage in youth futsal training to try and improve their creative ability on the ball. With how often futsal players touch the ball and the size of the court, they are able to try skills and do things with the ball that they wouldn’t normally have the courage to do on a soccer pitch. Successes on the futsal court is, therefore, easily transferred to the soccer pitch.

If you’re wondering, which football program is perfect for improving kids soccer near Hertfordshire or you’re simply looking to enhance your footballing abilities by training with Futsal teams near Hertfordshire, Fusion Football has got you covered. Train in quality Futsal courts, against challenging futsal teams and under the watchful eye of an experienced Futsal coach. For the best of futsal near Hertfordshire, sign up here for Fusion football’s futsal coaching course today and watch your game drastically improve in no time. 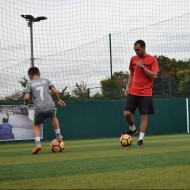